St. Michael-Albertville experienced its first loss in more than a year when it was steamrolled, quite literally, by Elk River in a Sept. 23 game that featured two of the state’s top three teams in Class 5A. It left the Knights a bit scarred, and ready to answer all of the questions when Homecoming 2016 rolled around last Friday night in Albertville.

Consider the statement made. STMA is back on track.

The Knights made some shifts on defense and completely shut down the Cambridge-Isanti BlueJackets from the second quarter on, rolling behind a strong running game of their own to a 45-7 victory in front of a packed house at STMA Middle School West field.

“It was what we needed, but it was what we knew we could do,” said Mitch Bourgerie, who ran for more than 180 yards on the night and provided the key spark on offense to get the running game going. His 75 yard scamper gave STMA a 21-7 lead and, for all purposes, slammed the door on any upset hopes CI might have had Friday night.

“The line started blowing people off the ball and we just found the holes,” the senior said of himself and junior running back Mitchell Kartes, who also had a couple of touchdowns on the night. “Once we got the schemes right and the push we needed, we could do what we wanted to do.”

The Knights used a first quarter drive to build a 7-0 lead, and then turned the Jackets over to pad it behind a 27-yard run by Bourgerie that made it 14-0. But Cambridge went to the ground on its next big drive, after an STMA turnover on downs, and marched 65 yards. The Jackets had good pushes from the offensive line on first and third downs, converting a couple third down and “short” yardage plays before getting a 12 yard run for a score from Ryley Nelson. 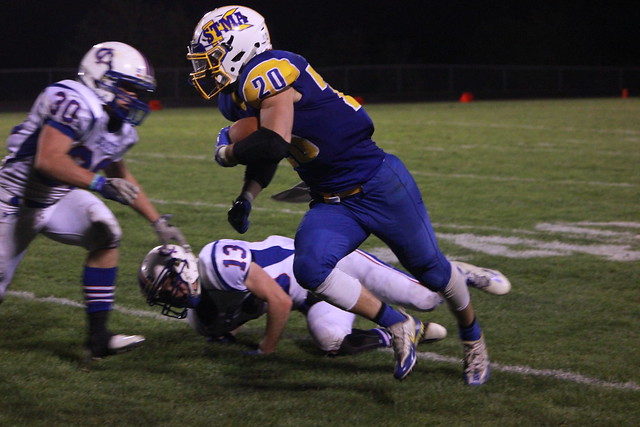 The 1-2 punch of Bourgerie and Kartes would provide the answer, as would some adjustments on defense. Coach Jared Essler said a change on the front of the defensive side started giving the Knights penetration it needed to break up Cambridge’s version of the misdirectional run game that stumped STMA against ERHS. Cambridge’s offense never got back on track.

But STMA struck with speed. Griffen Marquette hit Kartes for a screen pass in the flat, and the junior broke one tackle and made two others miss in a 40-yard dash for the end zone. Mitchell Kartes breaks a tackle after catching a screen pass from quarterback Griffin Marquette. Kartes would take it the distance for a 40-yard score.

Then, after a Cambridge three-and-out, Bourgerie turned on the jets after breaking through a huge hole in the line, bolting 75 yards for the score. With five and a half minutes left in the third quarter, STMA suddenly had a 28-7 lead.

Bourgerie would add a field goal in the fourth quarter, making it 31-7, and then the wheels fell off for Cambridge. One fumble set up a nice nine-yard run for DeSean Phillips, who picked up his first homecoming touchdown, making it 38-7 Knights.

The defense then chipped in six more, with Andrew Provost picking up a fumble and returning it for a 23-yard score. That created the final margin.

“We did some good things but we know there are still a lot of mistakes to clean up out there, too,” Essler said. “We haven’t played our best game yet. We know there’s work to be done. But we have to build on this. It was good with homecoming and the distractions to get focused and get a big win. That’s what we needed to have going into the next week and the games ahead. But, hopefully, our best football is still ahead of us.”

Typically, that’s what Essler has, in fact, done at STMA. The Knights have dropped some regular season games along the way – losing at home to Moorhead in last year’s state title season, losing at Chisago in 2014 – but found a way to play its best football in October and November.

STMA hosts St. Francis this Friday at MS West, with a 7 p.m. start. It’s “Youth Football Night,” meaning all STMA Youth Football teams – grades four, five and six, will run onto the field for a halftime moment in the spotlight. All youth players get in free with a paid adult, as well.